How to Make Soap

Since I already know how to make soap and have been doing so for quite some time now, I have felt the need to expand my horizons. To boldly go where....well, I guess where many soap makers have gone before, just not me!

Whipped soap making has been calling to me since I first saw it. It looks so lovely and light....it calls to be touched.

I did a little research on the web, and I do mean "a little".

While there is a ton of information about how to make soap, there wasn't much on using the whipped cream method.

As usual I cut short my search for information and dove right in. I was definitely missing a few key bits of information.

My first two attempts resulted in a heavy whipped cheese cake like soap and play-dough soap!! 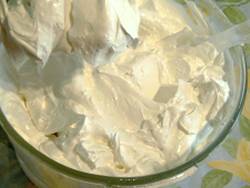 Don't get me wrong, both soaps are wonderful. They have a fantastic lather and look quite unique in their own way. I may even post my play-dough soap adventure in the future.

The point is, that instead of light and fluffy, I ended up with pretty solid and heavy. Not quite what I was going for.

Back to the computer I went and search some more I did. What I finally found is what I recommend to everyone who wants to learn how to make soap using the whipped cream method...join the Yahoo! group 'Cream Soap'.

While I enjoyed my experimentations, it sure would have saved me some time, effort and confusion. Those ladies sure know what they are doing.

Below you will find, not so much a tutorial, since I am new at this, but more of a documentation of my whipped soap making adventure.

If you are not familiar with soap making, I would strongly suggest learning how to make soap using the cold process and hot process methods before attempting whipped cream soap.

My Adventure with Whipped Cream Soap

As with all soap making projects, preparation is key to being successful, especially when you are learning how to make soap in a new way. 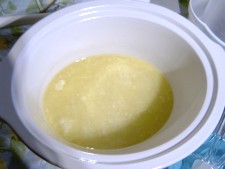 I began by assembling all my ingredients and tools (same ones I use for hot process with a crock pot) and made sure to follow proper safety procedures concerning sodium hydroxide and potassium hydroxide.

Yes, I did wear my goggles and gloves but I confess to cheating when it came to long sleeves....it was just too hot.

I set up my equipment and turned the crock-pot on to high so it would be warming while I measured out the following ingredients.

I started out with the stearic acid which requires the most heat to melt (I may pre-melt it next time in the microwave since it took so long) and ended with the glycerin. All ingredients went into the pot as I measured.

Once all the oils and stearic acid had fully melted, I proceeded to the water phase.

*Will use less water (20 oz.) next time and add small quantities of liquid later, after it has relaxed.

I measured out the water and then added the NaOH and KOH to it. Once the lye had dissolved completely, I slowly poured the solution into the hot oils, stirring as I poured. 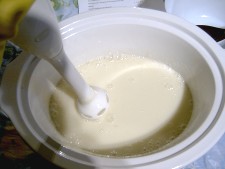 Using the stick blender, I then proceeded just as I would for HP soap making.

The stearic acid in the oils causes the mixture to seem to try and separate. I kept blending and the mixture became lumpy and then eventually was nice and smooth.

With this recipe, I found that the batter was still quite runny when it came to trace. That is because I used the full amount of water in the recipe.

Many whipped soap makers reduce the amount of water and add aloe juice, hydrolsols, etc. later on after the soap has cooled.

I decided against this since I wanted to know what the full recipe produced before I started messing around more than I already was.

The next step was really easy....I just walked away.

I let the soap batter cook on high and came back to check on it every 15 minutes or so.....except when I got distracted on the computer and the whole mix boiled over onto my kitchen table.

Lucky for me I always place a clean, thick plastic tablecloth down first and I was able to scoop everything back in.

New Rule #1 - do not get distracted while learning how to make soap -  it can get very messy!

Once I had decided that 'yes' the soap had traced, I mixed in the additives using my stick blender.

For this batch I picked silk powder...for the silky feel of course, kaolin clay so it would make a good shaving cream and icing sugar to give some extra bubble booster. 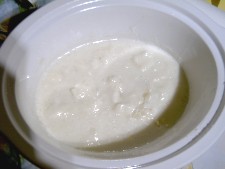 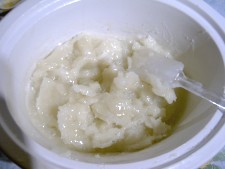 Over the next hour and a half the batter went from looking smooth, creamy and liquid to a lumpy liquid and finally to a thick, slick Vaseline like substance.

Once it began to look translucent, I started to test the soap for excess lye. Since I  didn't have any Phenolphthalein, I just did the tongue test until I didn't get a zap.

Which just happened to be the first time I tried. Whew...never did like getting zapped.

I completely spaced this step! I was soooo mad. Anyway, if I had remembered, I would have melted the stearic acid and the glycerin in the microwave and then mixed it into the hot soap.

This would have taken a few minutes to get it in since the mix was getting so thick. After that I would have cooked it for another 15 minutes or so and then turn off the crock pot.

Since I forgot this step, I just let the soap continue to cool. The newly made soap requires a 'rest' during which time the mix will lose some of its stiffness and become more pliable. I left mine for about 24 hours.

The following table shows the different stages the soap went through as I started to mix it up. 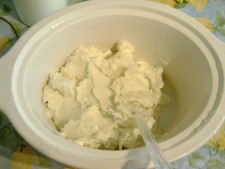 The soap has loosened up a little and become creamier after 24 hours but was still quite hard to mix.

Update: Next time I'll wait 48 hours to see how much it softens up. 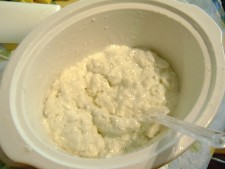 I added 1/4 cup of aloe vera gel and 1/4 cup of distilled water and mixed it up using a potato masher.

Update: Will not add this liquid - became too runny 24 hours later. 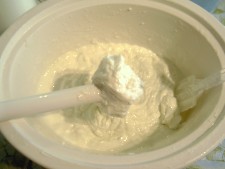 Using the stick blender I attempted to cream the soap but found the SB wasn't powerful enough. 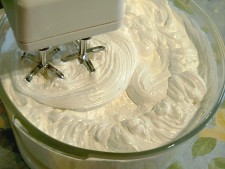 Instead, I transferred the soap to my mix-master and gave it a whirl. Much better. 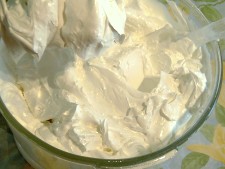 As you can see the blend became wonderfully fluffy and light. 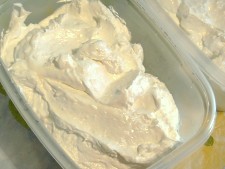 I transferred it into containers with lids so it can cure or "rot" as it is called.

From what I understand, I am to leave the soap stored away for one or two months. This period of rest is called the "rot" and the soap will become gentler, may loosen up some more and will develop a sheen.

Once the soap has sufficiently rested, I can then add scent and colour and place it in jars.

Couple of things to note:

1. For white fluffy soap, you need to use at least 50% stearic acid.

2. Stearic can be different depending on the manufacturer. Mine seems to be a really good strengthener since I needed more water rather than less which is what most recipes I found called for. Mine came from New Directions.

3. You can always add more water during the "rot" so don't overdo it early on. Make the soap a bit stiffer than you would like and it will probably loosen up a bit.

Update - 24 hours after whipping the soap it really relaxed even more - too runny for a "whipped soap" but looks to be great for a body wash...sigh...Recommendation - learn the art of patience!!!

4. If you do have too much water, try leaving the lid open so that some of the water can evaporate. Give it a stir a couple of times each day.

5. Remember to apply to join the Yahoo! group CreamSoap. **Take note that this is a closed group and is for experienced soap makers only.

Home › How to Make Soap › The Whipped Cream Method