Can Soft Soap Be Fixed? 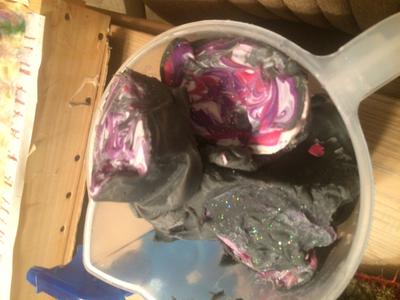 I made a cold process soap recipe and in the middle of portioning out the oils, my scale's batteries died.

I got new batteries but had completely forgotten where in the recipe I left off, and how much more of the oil I was measuring was needed.

I just guessed (wrong!) and now 4 days later the soap is still the consistency of soft cream cheese. So it is salvageable? rebatch? or throw out?

It was individual soaps in a silicone mould. This was my first major goof, and I have no idea what to do!

Theoretically the soap can be saved. The problem comes in with the fact that we have no idea how much more lye would be needed to saponify the left over oils that are making the soap so soft.

Each recipe is carefully formulated to have the exact amount of lye needed for the amount of each specific oil being used.

As we don't know how much of each oil was used, we can't figure out how much lye will be needed.

As I see it you have a couple of options.

You could try re-batching the soap and add a small amount of lye solution to the mix. This isn't the safest thing to do since you could end up with a lye heavy product that would only be good for laundry. Since the soap has quite a bit of colour in it, that might not be ideal either.

Sometimes it is possible to incorporate a goofed soap into another batch by grating up a small portion of the soap and adding it to the new soap base at trace before pouring. The key with this method is to have very small bits so the oils and lye can combine and saponify. With your batch being so soft, this will be difficult.

Currently, I'm assuming the soap doesn't really produce much of a lather since it is so oil heavy. Is it oily enough to be used in the shower as a semi solid body butter?

If it is, try chopping it into rough single use chunks that can be used at the end of each shower. At least that way the ingredients don't go to waste.

Return to Submit a Question.