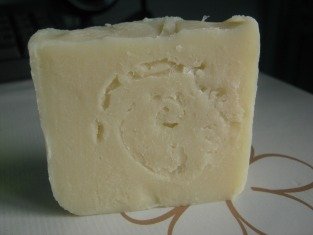 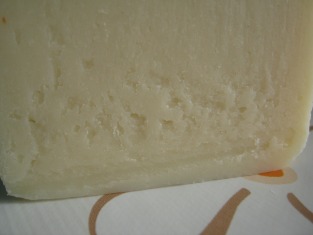 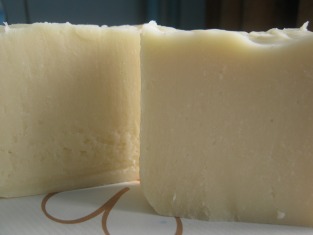 Yesterday I un-moulded my first batch of goat's milk soap and it is too soft.

I should say that the color come out beautifully creamy white because I followed all the instructions about the frozen milk, temperatures of mixing the oils on 27-30 C and freeze for 2.30 h (it was 30 C when I put it in and went to 0 C), then refrigerated for 4 hours (from 0 C it went to 11 C and stayed there for 2 hours) and because it's temperature stopped rising I took it out from the fridge and let it stay in the mould in my room for 18 hours (from 11 C went to 26 C then came back to 22 C and stay there for 2 hours).

Then I decided to un-mould it. I knew it was not as hard as it should be but I wanted to try some stamping so I took it and cut it. I forgot to mention that I used a wooden mould.

But- here's my problem- The goats milk soap wasn't really hard enough. When I cut it, it just stuck a little bit on my knife, and when I tried to stamp it, it was a disaster because my soap just stuck on the stamp.

So my question is do you think it's going harden anyway now when it's cut and out of the mould?

Thank you for your help in advance

Though I haven't run your recipe through a lye calculator, from what you have described, I think your soap will harden just fine given time.

Any soap that doesn't go through the gel phase (and spending time in the freezer or fridge will often stop the gel phase from occurring) will take longer to harden.

I suggest leaving the soap as a full block for longer next time before attempting to cut it and stamp it. Test the soap by pressing your finger into an edge.

If you leave a dent without having placed much pressure on it then it is too soon to cut.

As for stamping the soap, I don't think you need to rush the cutting process in order for the stamping to work. A freshly cut, fully cured block of soap is still quite soft on the inside (unless you've made a very hard type of soap) and should still be able to be stamped on the cut sides.