My soap feels so weird. 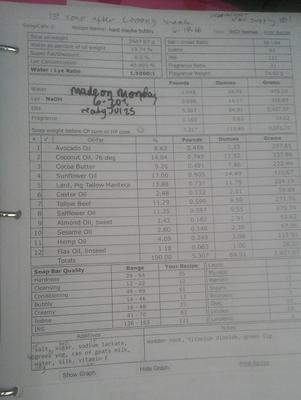 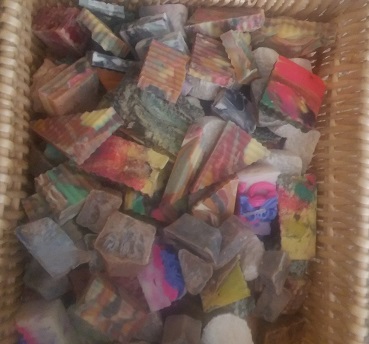 My story is true, not a prank! I actually make soap!

Thanks SO much BTW for fielding questions from ignorant people like me!! I am the only person I know making soap, so I don't know anyone else I can ask! :D

This was my 21st batch of soap, so I'm still pretty new at this; unfortunately, the mishaps abounded in this batch I made 8 days ago. I really hope you can help me anyway, even though this story reads like a slapstick :(.

So around 9 days ago, I decided to try out a bunch of 'new' ingredients (new to me), all in one batch of soap, which maybe wasn't the best idea any human being ever had.

I was attempting my first batch with goat's milk instead of water. When it turned hideous vomit brown, I rushed to the computer & read that I should have frozen the milk first. Whoops. No WONDER it was SCREAMING hot, wow!!! But titanium dioxide made it pretty & off white again, so yay! No big deal! :D

While I was googling around about the hideous color, I read that the can of goat's milk I used is actually double strength due to it being evaporated & that I should have thinned it with an equal amount of water, whoops! So I quickly figured out how much more water I should add (I'd already added about 10g of water to make it match what the recipe originally called for) & I added the adjusted amount to the milk/ water/ lye mix.

Then even more than that went differently than anticipated....

Since it was a batch of soap I was already doing an experiment on, I decided to try out a BUNCH of new stuff at once! So I also added 1/4 c vanilla Greek yogurt, 1 Tbs salt, 1/4 c. sugar, silk & 1 tsp vitamin E. (I've added silk to all my batches, but everything else on that list was something I've never tried before. Admittedly, adding a bunch of new stuff at once, to one batch of soap maybe isn't the best way to save time ever invented, but I had no idea this was anything but a bunch of fun ideas all at once!)

Once I was done messing with all that extra stuff & the lye/ milk/ water hybrid, I started piling the solids into the crockpot to melt (I CP everything, but I use the crock pot to melt the hard oils first. I hadn't yet read about the room temp way to soap at this point.)

As I'd measure, I'd run out of whatever kind of oil I was using, I'd rush over to the computer to see what I could substitute, change the soap calc recipe from "percent" to "grams" & adjust the oil I'd run out of to reflect what I'd ended up putting in, then add to the list whatever oil the internet told me I could substitute, with the amount I figured out I needed to match the original oil's amount, minus what had been already put in before I ran out, re ran it to check the lye, adjust my superfat % numbers to make the numbers n the page match how much milk/ water/ lye I already had sitting there chillin', (it ended up going from 3% SF to 8.5% SF by the time it was done), then I'd print the new recipe, with the new oils I was to add listed, in the new amounts, and continue making my batch of soap.

This happened like 3 or 4 times during this one recipe!! (But I used a calculator & a scientific scale that weighs things to the thousandth of a gram & I always write down how much everything actually weighs as I weigh it, for every recipe, so when I ran out during this one, I knew exactly how much I'd added before I ran out, and I was being super careful, because I love math & precision, so this was kind of an exciting, interesting extra dimension to soap making; it wasn't frustrating or tedious or terrifying, it didn't make me frantic; it was kinda fun! So I'm sure I did fine with the numbers/ substitutions, in spite of how insane it must sound to be adding oil for a few seconds, then dashing over to the computer for a few minutes- then printing out a new sheet & dashing back to my soap project- every few minutes.) Oh well. I'm new at this :D. Whoops. Lord willing, it won't happen again though :D)

My recipe was made of oils I've used before- though I planned to make this much soap, I didn't plan to use THIS many different kinds of oils; that's just how it ended up due to running out of so many oils mid- recipe. So this was how it turned out:

For coloring I used titanium dioxide, madder root (first time trying madder root! :D) and for fragrance I used a bit less than 2 oz of green fig from Brambleberry.

And my soap turned out feeling WEIRD!! It looks fine (my molds were new ones my daughter got me for Mother's Day, naturally, in keeping with the 'everything is new' trend for this one recipe), it smells amazing, It feels... gross- hard to describe- like waxy.

I pick it up to smell it, and I wipe my hands immediately after putting it down. It's not oily or slippery or sticky, it's waxy or something, and my hand feels waxy after touching it- this just occurred to me, I usually soap at 3% SF, would the reality that it ended up 8.5% super-fatted feel THAT much different from 3% I'm used to feeling? Could it just be I'm totally not used to any soap feeling like this, so it's fine and not weird or gross?

Or maybe could it be that I usually try to do 60% hard oils, 40% soft & due to all the substitutions, I ended up almost flipping those numbers, could that be it- if so, will it feel less weird if I let it age for a few months instead of a few weeks?

Or can you figure out what I did wrong (besides the obvious) or if I can use this anyway eventually?

I'm attaching pictures, not because they'll be very helpful, but because I sincerely don't want you to think I'm just making all this up to waste your time; this isn't a prank, I'm attaching a pic of the recipe I ended up printing out after I ran out of my last oil mid pour, a pic of the goat's milk soap (I kinda of suck with the madder root, it turns out).

I was going for pink & off white swirls, but it set up so fast, only some of it ended up streaked with pinkish) and a pic of my basket of other soaps I've made, I'm real. I make soap just so I don't have to buy the $8/ bars anymore & to give away, I'm not running a business but I hope you answer this anyway; I'm just SO curious about this!

I can mail you one if you want, so you can feel it, let me know!!

Thanks so much!! :)
Arline Sprau

Whew! That's an adventure all right!

I'll be honest, I have no idea why the soap would feel waxy but I'm not surprised that it didn't turn out quite like you hoped.

When you have that many changes and adjustments while in the process of making the soap it is super easy for errors to occur.

A higher super-fat could certainly make the soap feel different although waxy isn't what comes to mind. I'd think more like an oil film.

As for the problem being a higher percentage of liquid oils, I don't think that's it. I have quite a few recipes that use more liquid oils than solid oils and they don't have a waxy feel to them.

I'm guessing that the reason the soap set up so fast is the high amount of sugar content in your formula. Between the goat's milk, the yogurt and the sugar itself, you have a lot of sugar in the recipe. Sugar will increase lather but if used in too large a quantity, it will also speed up the trace time.

The recipe has such a large list of ingredients that it's pretty hard to figure out what might have caused the waxy effect. It's also likely that a combination of things has caused it rather than just one.

When using new ingredients, it's a good idea to introduce one at a time. This way you get to see and feel what impact the ingredient has on the final soap.

Try giving the soap some time to cure and see what happens. I would also test the pH level of the soap to be on the safe side.

In the future it might be a good idea to make sure you have enough of each ingredient before you measure out and mix your lye. You'll find that changes are much easier to make that way.