by Jack Wang
(Victoria, BC, Canada) 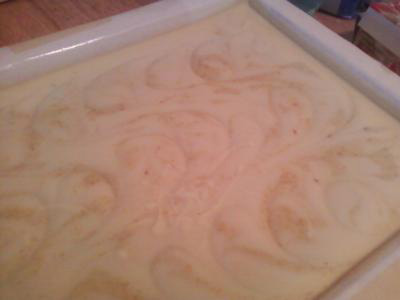 Recently I bought a new soap mold (a flat mold ~4lb capacity) and I've made 4 batches so far. Out of the 4, two have ended in mysterious disaster.

All 4 batches had beads of liquid on top after the initial 24 hour cure period, however the two that I thought was unusable had a large amount of liquid and also 'craters' (like on the moon). This liquid is slightly oily and dark yellow to brown in color.

I use the same recipe for all four batches with some variation (like using beer or green tea instead of water) but I'm pretty sure it's not because of that.

Is the lid causing the soap to retain too much heat and therefore separating? I've emailed many other notable soap makers and was hoping for your opinion on this as well. I've lost 3.2kg of what could have been really good soap, and I still have no idea what caused this.

I think you are right. I sounds like the soap is overheating.

The ingredients we use, the tools we use, the soap molds we use and even the locations we insulate and cure the soap in all play a part in the success of our soap batches.

I don't know about green tea but I do know that beer heats soap up considerably (due to the high sugar content) and any soap made with it needs to be insulated with care.

I suggest insulating with the 2 pieces of wood and towels for those batches and watching until the soap reaches full gel. Once it has, remove the lids and place a fan on the batch. This will help stop the condensation from resettling on the soap and forming the soda ash.

Any time I have started using a new soap mold, I have had to experiment a bit to find out the perfect process for insulating the soap. Some molds retain much more heat than others. Even the location you place the soap to insulate can play a huge part.

I once tried moving the location I insulated my soaps in. Instead of placing it next to an interior wall in my house, I placed it next to an exterior wall. This particular house was old and drafty and that batch of soap cooled so fast it looked more like chaulk than soap. I had to throw the whole thing out.

Don't be afraid to check the progress of your soap when it is insulating. If you see that it has reached a full gel, remove the extra padding and open it up a bit, or all the way if necessary, to stop the soap from becoming too hot.